Zargak’s Zeal is a Choose-Your-Own-Adventure game. Inspired by classic fantasy books, this is a story featuring the titular Dark Wizard Zargak and his zealous and cruel regime. However, Zargak’s not the only wicked one who’s looking to cause harm to the kingdom of Tramah.

Dragons are ravaging the peaceful ogres, demons are now ruling over the dead and the damned – and of course, Entman’s having yet another mid-century crisis.

The Dark Wizard Zargak has been at it again. He’s up to no good, capturing the good citizens of Tramah! He’s been using them for Nefarious Reasons™ and now is looking to capture you! All of this because he wishes to monopolise a dirty, disgusting new skincare range. Meanwhile, the friendly Ogres of the North are being ravaged by a vain Dragon Queen, Nufallah, who wants to add to her property portfolio. Finally, the Crypt of Champions has been taken over, with the dead rising up for the vile but extremely bored Demon Lord, Shaazaah. It’s up to you to decide whether you are the one to chase down these mythical, but highly deadly Banes of Tramah.

Chase after Zargak, defeat him and the way will unlock to more routes in the world. Choose your own adventure, choose your own fight – And encounter some strange friends (and enemies) along the way.

The artstyle is simple to understand; with a 4k image for the background (not that I’m an artist), the objects that can be interacted with are all pixel-based designs – But not quite your standard pixel art.

I had a weird idea early on that this game’s protagonist was going to be a cube. Initially, the game was even going to be called “Cube’s Crusade”. It didn’t stay that way for long, as it just wasn’t in keeping with the theme of the game. So after some pottering around, I eventually came up with the idea of making an Elf woman who reminded me of Link…

… Because how do you get much more adventure game than The Legend of Zelda?

So this is our happy-go-lucky Elf-lady protagonist. The model was based off this DeviantArt base, but then heavily edited and altered to become the Elf she is today. So thank you to “ProjectPixelChest” for the inspiration.

The Combat Screen was a fairly simple part to put together. Whilst the font will likely be changed in the final build, this is the basics for how the combat screen is likely to look. So again, some basic cosmetic changes, but for the most part, this is it!

One point to note, there’s a file which lists all of the variables of each enemy. What happens is if a player is going to encounter an enemy, the game looks through the list, finds the relevant enemy and pulls their information through. The grey section in the middle of the screen will then update with the relevant image (Though the images have yet to be finalised! Expect a battle image for ENTMAN soon!) 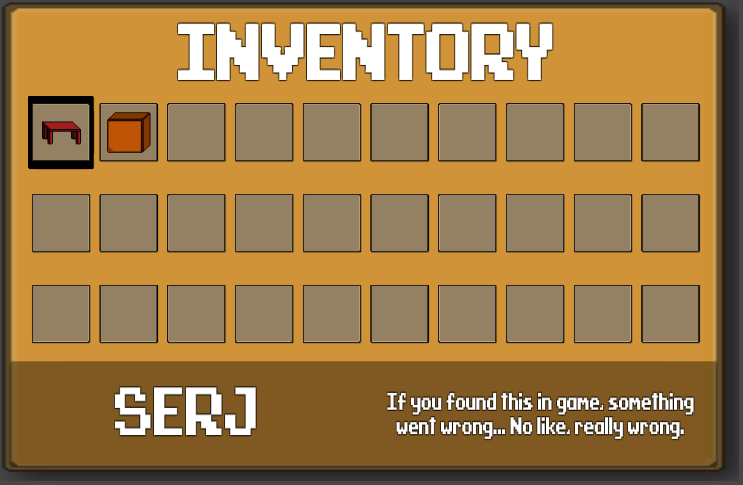 A good RPG/Adventure game needs a workable inventory system, right? So I’ve crafted something fairly simple. Basically you can use consumables out in the world, as well as in combat (With some exceptions). Be sure to look out for the 40 consumable items, not including all of the equipment in the game!

Beta testing will be taking place in the future – Anyone who contacts me, by way of a comment or a message to me directly will be placed in the Beta.